The Woman Behind Ireti Doyle 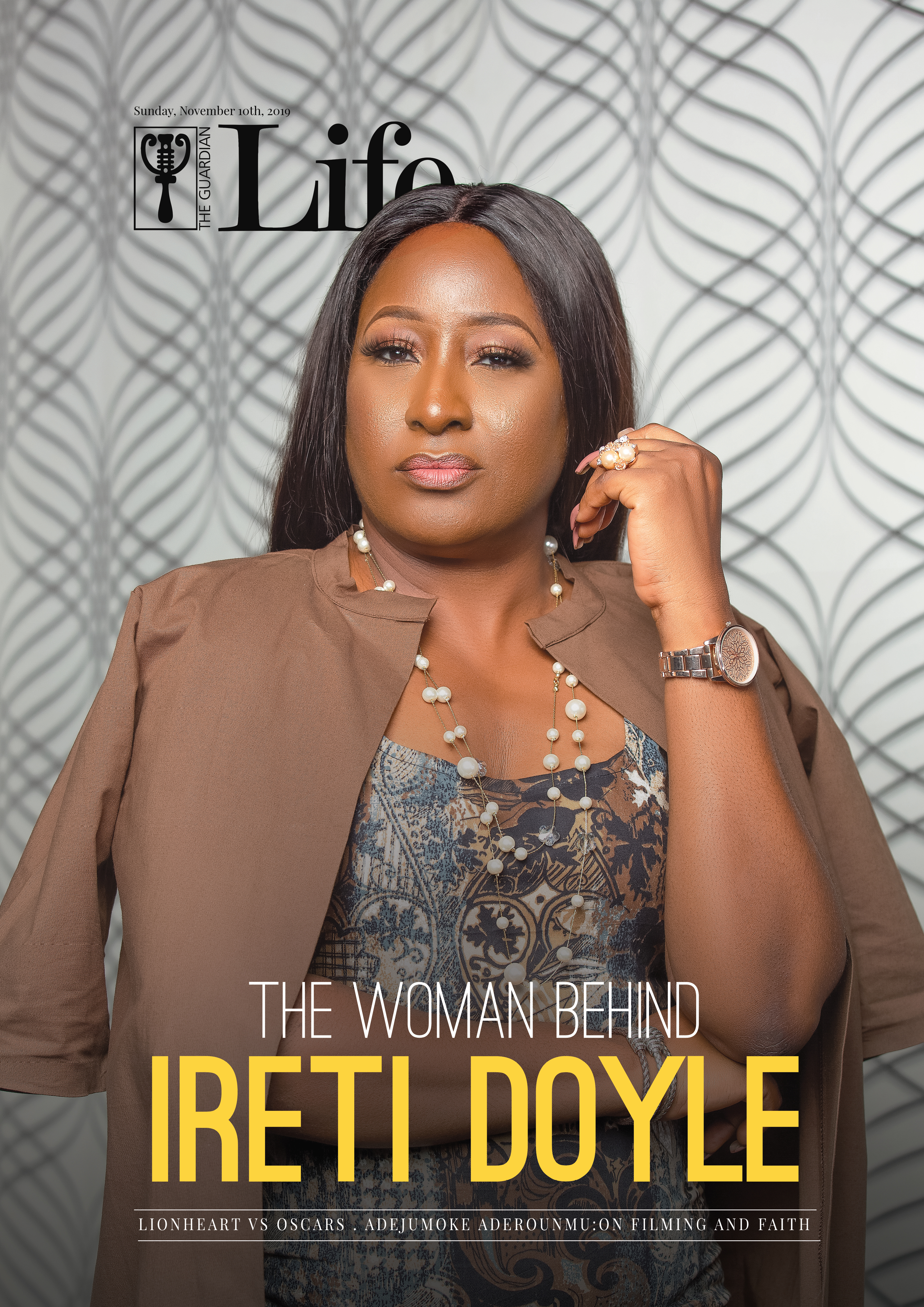 “I want to do you, whatever you want, Ireti Doyle hums and moves to the rhythm of “Blow my mind”, Davidos’ single featuring American artist, Chris Brown as I walk into the dressing room.

“It’s her best song,” Tony our stylist chips in. “And I like Burna Boy. I know all the lyrics to his songs, she adds. Soon, she and her daughter, kick off a mild argument on who loves Burna Boy more leaving the team laughing. It is a wonder to know that Ireti Doyle is a mother of six children and a grandmother.

“I am ready and good at taking directions. Just tell me what you want me to do, she says ready for the photoshoot.” True to it, her shoot takes less than 10 minutes for each look despite being interrupted by own playfulness. 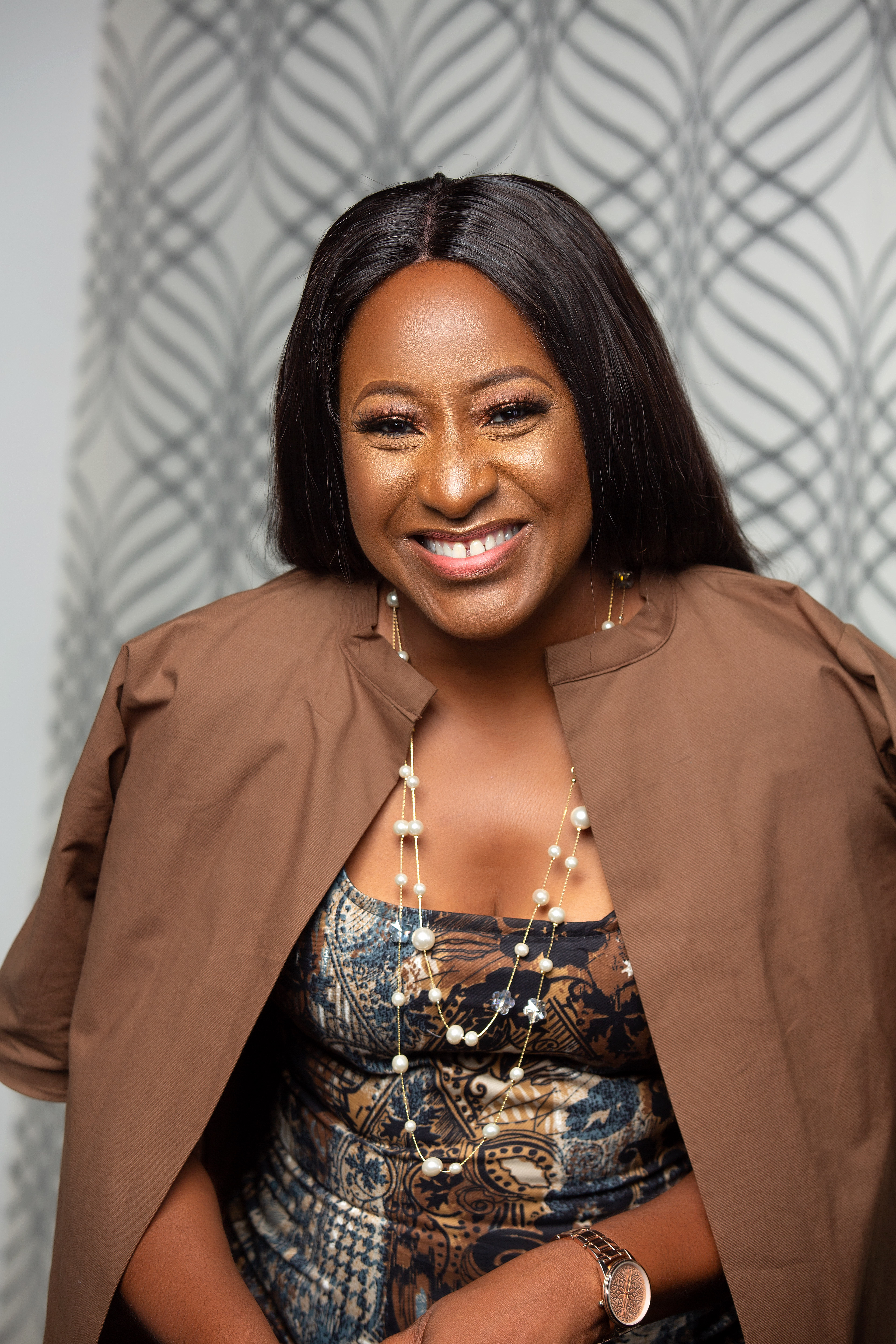 Ireti Doyle, known as Sheila Ade-Williams to Tinsel lovers, watchers of Fuji House of Commotion as Caro and more recently, Mrs Obianuju Onwuka in The Wedding Party, stumbled into the world of television production.

In the year 2000, as a production assistant with Patrick Doyle Media, she was given the task of producing a fashion show even though she had never done it before. Married to one of Nigeria’s finest broadcasters and actors, Patrick Doyle, at that time, she learned quickly. What she did not know is that the show, Oge with Iretiola, would become a household name.

“Did I think it would be as successful as it turned out to be? Absolutely not. As far as I was concerned, it was just a job pending when my dream job (acting) would turn out to be,” she says with a glint in her eyes.

“For crying out loud, I said I wanted to act and you people are telling me to present. After a while, I began to enjoy it. 10 years on, I looked up and saw that we had a great show that had done extremely well and had a large following.”

Broadcasting gave her the needed skills that have made her a “better actor.” “I am fortunate to have been given a platform to not only pursue but achieve my dreams,” she confesses.

While she had gotten the attention of many Nigerians and become loved as a presenter, Doyle still battled with the disappointment that she was not in the acting industry. Although people close to her knew she really wanted to act, Ireti, a few years before, disliked Theatre Arts. 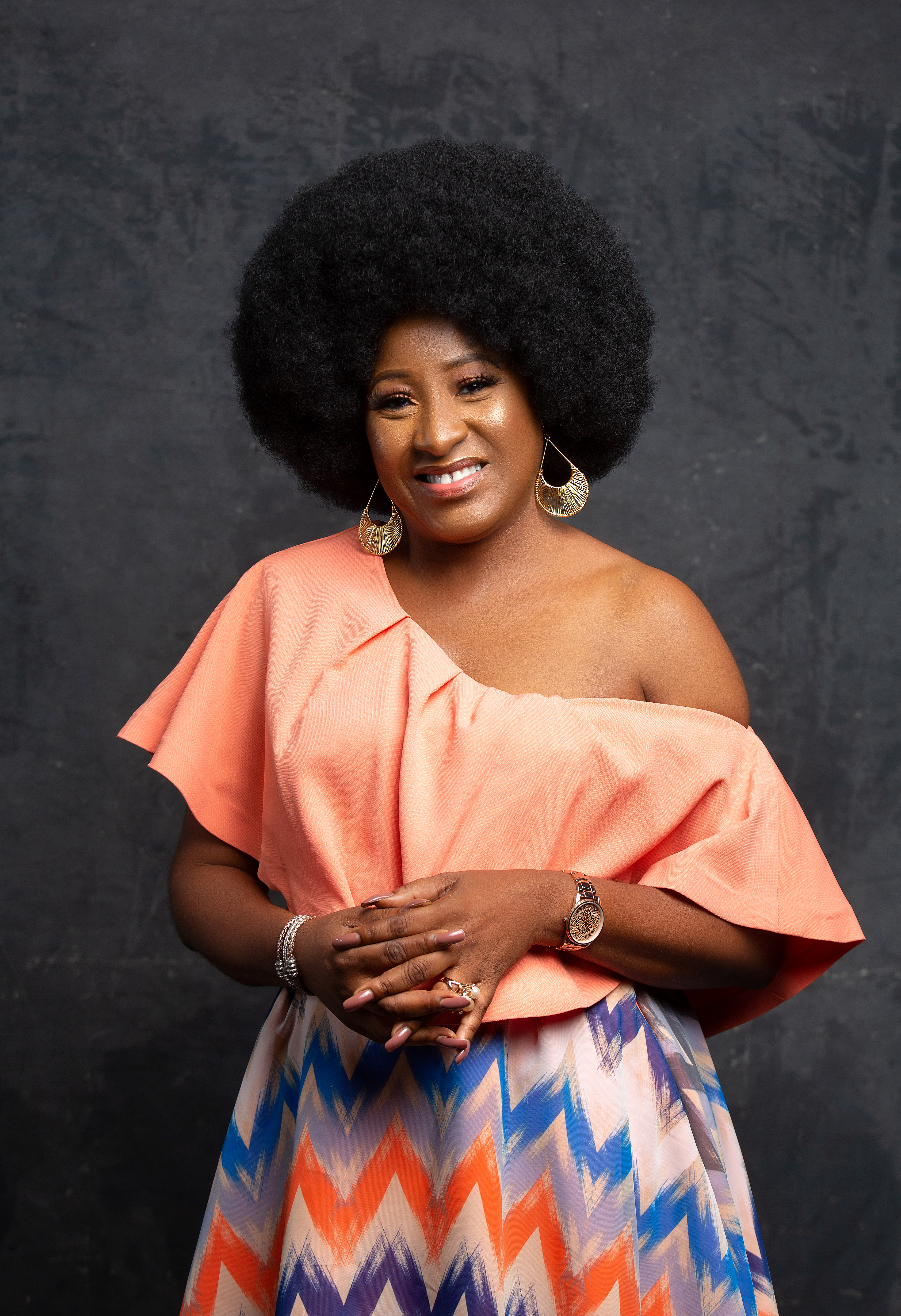 Filled with dreams to become the PRO at Chevron Nigeria Limited, Ireti applied to read English at the University of Jos. Her first wave of shock came after the university offered her provisional admission to study Theatre Arts. Resentful, she accepted it with the intention of changing to her preferred choice after her first year. A purpose she maintained until two incidents had an impression on her.

A coursework titled Theatre Workshop required she participated in a group production or face an extra year. Sulking over the demands of the course, she reluctantly auditioned as one of the last actors. She intended to take up a small role but ended up taking the lead. “Somehow I instinctively always knew what to do,” she says.

Again at home, she decided to watch the 1990 film “Mind Bending” starring on-screen icon, Joke Silva. Like a charm working its way through the body until it captures the mind to do its bidding, Doyle was fixated on the character of Silva and that would become her Eureka moment. “For the duration [it lasted], I could not look anywhere else. Joke Silva had me in the palm of her hands. She took my emotions and there was nothing she didn’t do to it. That day, I knew that this is what I wanted to do.” 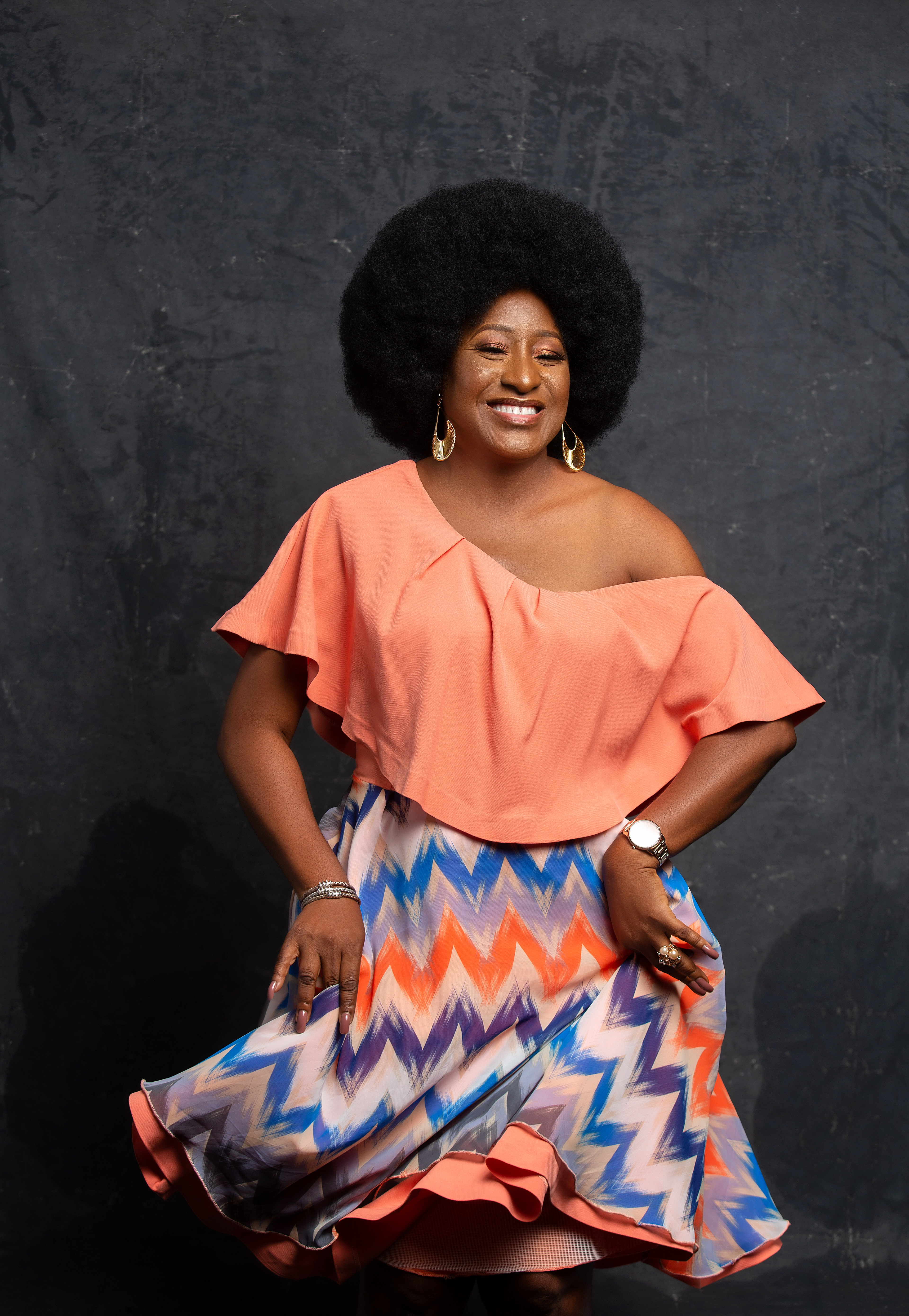 Today, she is famed in Nollywood as an actor’s actor sans the diva attitude. “That word Diva? Leave your diva at the door and give a diva’s performance without the diva’s attitude,” she says.

Perhaps, fans’ love for her is due to her ability to be totally immersed in the character so that long after the film is over, people still identify with it. While this is a great trait, film lovers have seen actors get lost in character that they sometimes witness an identity crisis between the character and the reality of the actor. While it differs for actors how long they remain in character, Doyle admits that she has had her fair share.

“Acting requires you to connect with real emotions. If that character is sad or depressed, you tend to feel these things. Unless the story is resolved in the production and the character achieves catharsis in the production, you carry that baggage with you.

“I remember Bimbo Akintola’s series, “Circle of Three”,  and my character wanted to be married so she bent herself out of shape. For whatever reason, I did not realise how that character had eaten into me. For a couple of days, I thought I was fine. Then one morning, as I was having my bath, I was scrubbing my body harder and I was sobbing. At a time, I said, ‘what is going on with you?’ and after that was over, I felt normal. I think the more years you spend doing this, the more tricks you learn.”

It is no debate that Nollywood has witnessed rather interesting times that has made it globally accepted as a reputable institution in terms of content and cinematography. The emergence of new strong female characters and female players are a development Ireti is pleased with and says there is a need to develop more likewise characters.

“I’d like to see strong female characters that are strong, period. Not strong because a man did them bad or if a female is bad, let her be bad just because…not because a man broke her heart.”

While these developments are commendable, critics continue to argue on the commonness of recycled storylines.

“We are Africans, our storytelling methods are quite different. We are the tales by moonlight kind of people. Show me 10 films and there are 10 different ways to tell a story, let people choose whichever way they want to tell their story. Can we do better? Absolutely.. everything is evolving. I read a lot of short stories on Twitter and my mind just goes wow so we are getting there.”

Refusing to undermine the importance of critics, Ireti says, “ A lot of critics are closet performers who really wish they could be out there in one capacity or the other. Maybe out of fear or having failed, they now decide it is their job is to water down peoples’ work. You [critics] need to fix up. There is a difference between a hack and a critic and it all lies in the way you present your criticism.”

While she affirms that Nollywood has since seen new energy, global acceptance, and courage, she is bothered by the lack of structures in the industry. “I’d like to see structures that support the people who work in the industry, unions that support the personnel…that has a cohesive plan to cater to the actors instead of going to the public to ask for money when they fall ill, an actors guild that would fight for royalties.”

Linked to this is the dearth of funding. In this regard, Ireti advises, “If you are wise, as a young actor, get a side job until such a time when acting can sustain you. Google it, as a professional actor, it is guaranteed that you will spend half of your working life unemployed, underemployed or part-time unemployed. So if it is a skill that you can monetise, please go ahead.”

Ask a fan of Ireti Doyle and they’d tell you about her times as a broadcaster, as the wife of Patrick Doyle and as a woman who has risen from being identified for giving birth during her teenage years to becoming someone of great repute.

While some are quick to point out that she is a great example, she says that if she had superpowers in this regard, she’d make people “see themselves in 20 years, everything you can possibly be and can accomplish. If you could just see yourself in 20 years time, some of the things you are doing right now, you wouldn’t be doing it.