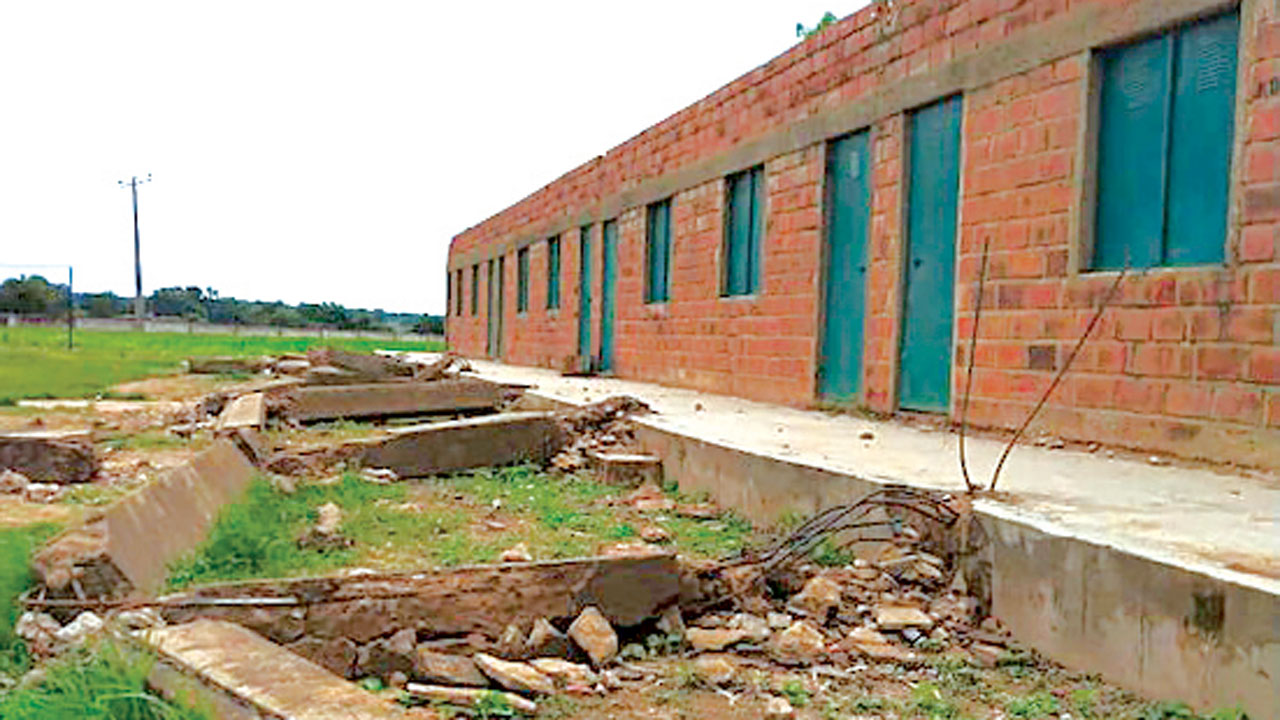 A portion of the collapsed school

• He Always Wanted To Be In School, Says Mother
• No Word of Condolence From Government
• Basic Education Projects Undermined By Corruption, Poor Execution

Drops of tears streamed down the eyes of the late Umaru Musa’s mother as she spoke. All over her light complexioned face, the pain of the loss of a dear son was engraved. The vicinity was a settlement in the backwaters of Dembo, a sleepy suburban settlement on the outskirts of Zaria. From the door of mud house, Musa’s siblings poked their heads mournfully to catch a glimpse of the stranger who had come to interview and share in the grief, which had enveloped the household and by extension, the community.
“There is nothing as painful as losing your own child; we really felt bad about Umaru’s death,” his mother lamented. She said the pain felt by family as a result of the death was made more unbearable because there was no word of condolence or any explanation from the Kaduna State Government.

“I have six children; Umaru was the most brilliant among them and he is very brave, he liked going to school very much. Even the elderly people liked him a lot because whatever you asked him to do, he would not argue, he would always obey.
“As his mother, he doesn’t do anything that will make me angry; whenever I say to Umaru, “do this or that task for me,” I won’t asked him again he will just get up and do it. He was in private school before but when he reached Nursery Two we had to remove him from the private school because we could not afford it. That is the reason he started attending this school where he died.”

Since the death of the 11-year-old Primary Four pupil at the Local Government Education Authority Primary School in Zaria, Kaduna State, North West Nigeria, there has been unease in the community with several parents reportedly vowing to stop their children from attending school. The apprehension stems from the fact that Umaru’s death happened when a poorly and shoddily constructed pillar in a classroom building caved in and crushed the boy to death. According to a member of the School Based Management Committee (SBMC), the tragic incident happened during break time, while pupils were playing.

Ironically, the building in question, which ended the life and promise of the young scholar, was not a particularly old one. The structure was built only six years ago in 2013; when at the school premises, the date of construction could be identified using the project code printed on the building. It was marked: KD/SUBEB/UBEC/13/PRIM/NC/145. Although the contractor who executed the construction had not been identified at the time of filing this report, members of the community have been insisting on unmasking the person responsible for such poor construction, which has now led to the loss of a life. On the ground where the tragedy happened, bent rods of iron, and scattered pebbles and sand from what should have been proper building concrete, remained as tell tale signs of how shoddy the construction was. Added to the stark reminder at the tragic scene were the disturbing sight of classrooms whose roofs had been blown off, meaning pupils would have no choice, but to attend classes with no protection from elements, including the sun and the rain.

Consequently, the tragedy has put the spotlight on the state of Universal Basic Education (UBE), a federal and state government co-funded program and backed by an Act of the National Assembly, which aims to deliver quality foundational education to millions of children across Nigeria. In 2017 for instance, the state reportedly accessed N2.8b from the 2013 to 2015 Universal Basic Education Commission (UBEC) capital grant, apart from other resources, which accrued to the basic education sector from state coffers. According to civic groups monitoring the implementation of the UBE in Kaduna State, unbridled corruption and lack of accountability in the management of program funds for school infrastructure and equipment have compromised the quality of the service delivered.

One of such groups, the Resource Centre for Human Rights&Civic Education (CHRICED) has been urging citizens in communities not to feel helpless about the poor state of service delivery in the basic education sector. With the support of MacArthur Foundation, CHRICED has been implementing initiatives to galvanize community leaders and social influencers in Kauru, Kubau and Zaria to take more than passing interest in how basic education funds are expended. The group is inspiring communities to take advantage of the ongoing governance reforms being instituted by the Governor of Kaduna State, Mallam Nasir el Rufai. The Governor has since signed the state onto Open Government Partnership (OGP), an initiative that aims to promote open government, empower citizens, fight corruption, and harness new technologies to strengthen governance.

These commitments to accountability and transparency signed up to by the government form the basis on which the NGO has been echoing community accountability demands for a full scale investigation into the death of pupil Umaru. In a statement, the groups said it is disheartening that a child, who made himself available in school to be educated in order to have a bright future in life, would have his life cut short.

“This tragic loss of the life of an innocent child is yet another reminder of the cost of corruption, and how it seriously affects the lives of ordinary citizens, especially in the area of access to Universal Basic Education. We call on the government to launch an inquest in order to understand what went wrong with the contracting processes, and how they produced such a disastrous outcome.

“There is also a need to address the conflict of interests, and other flaws which have undermined the delivery of quality basic education infrastructure, and other related services. In this particularly tragedy, one child lost his life; if urgent steps are not taken to address the issues, more children could be in danger.”

At a recent town hall meeting, which was transmitted live on radio, community leaders and monitors tracking school projects in Kauru, Kubau and Zaria presented dismal reports on state of implementation in their various localities. In some cases, projects for which funds have been budgeted and released as far back as 2014 to 2016 are yet to take off. For instance, a Community Monitor from Kubau LGA, Mr. Yushau Abubakar stated that, in Community Primary School (CPS) Anchau, the planned construction of a block of 24 classrooms, office and toilets, which was supposed to be completed in 32 weeks has not commenced. According to the SUBEB 2016 Action Plan, the cost of this particular project stands at N163,165,945.97k (One hundred and sixty three million, one hundred, and sixty five thousand, nine hundred and forty five Naira, ninety seven kobo).

Similarly, in the same 2016 Action Plan two projects were awarded to Government Junior Secondary School Kargi. They are the construction of four classrooms and procurement of two-seater, including tables and chairs for teachers. Community members have complained that while the classrooms have been completed they were locked up by the contractor. Yet the school in question has a pupil population of over 2,000 students with only eight functional classrooms, leading to severe overcrowding and the consequent threat of disease outbreak. The plight of the school and its teeming pupils is being further worsened by the fact that the contractor was neither introduced to them, nor is there any SUBEB official providing any detail about next steps for the handover of the locked classes. Monitors also reported that out of the 2000 pieces of furniture ordered for pupils, only 80 have been supplied. Also, of the 90 teachers furniture (tables and chairs), which were supposed to be procured only four chairs and five tables were brought with no indication of when the rest would be delivered by the contractor. The total cost of this particular award for furniture stands at N41,766,90:00 (forty one million, seven hundred and sixty six thousand, ninety Naira), according to SUBEB documents.

His mother and siblings

The pattern of complaint was along the same line when Mr. Biko Barde, community monitor for LGA gave updates on state of projects in his area. He informed that in 2015, LEA Primary School Dokan Karji was awarded a contract on the Construction of a block of 12 classrooms, and the procurement of 1,840 units of two-seater pupil’s desk/benches. Teachers chairs, tables and magnetic boards. As at the time of filing this report, the supply of furniture worth N38,240,370.00 had not been done. Also left undone is the building construction resulting in problems of overcrowding as the school in question only has two blocks of classrooms to accommodate its population of over 1000 pupils.

“Even some of those classrooms have been abandoned because they need urgent renovation. There are also no toilets facilities in the school; the pupils defecate in the open.
“And because of the non-execution of the projects, which have for long been awarded, all the pupils were found sitting on the bare floor. There is no project ongoing, and no sign of a contractor on site. After five consecutive visits to LEA Dokan Karji Primary School, the situation is the same.”

On its part however, SUBEB has tried to push back against mounting criticisms by highlighting its own challenges. In the first place, the Board talks of funding constraints, which make it unable to execute projects in more schools, which have serious infrastructure deficit. At the town hall meeting referenced above, SUBEB also complained about terrain problems in some areas, which it said made it difficult to mobilise to site and execute projects. SUBEB Director of Projects, Salisu Sanusi said: “I think those of you who are monitoring projects should also try to clarify; it is not every project you see that is a SUBEB project. And for the project you said has not started, you must know it is a process.

“When we place adverts it takes months for the project to commence and also in the course of carrying out the project we sometimes realise that the money allocated to the project will not be enough or the areas cannot take that project so the contractor would write to SUBEB for proper solution. On the LEA Dokan Karji Primary School that was mentioned, the reason why the project has not started yet is due to the bad road and the problem of the terrain, which make it difficult for the contractor to bring in the kind of equipment required to execute the project.”

The excuses by the agencies notwithstanding, the reality is that the essence of the billions of Naira being expended on basic education projects is constantly being undermined. Citizens who are supposed to become literate through basic foundational education as a fundamental right guaranteed in the Nigerian Constitution are being denied that right. And in tragic cases like Umaru Musa, poor citizens are paying with their lives because of the lack of accountability in the basic education service delivery chain.