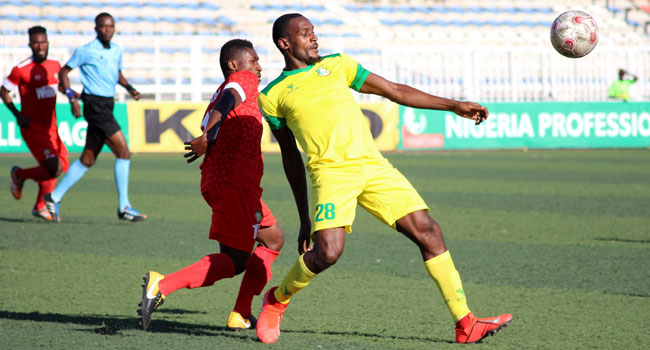 Still relishing in their first league win after beating Ifeanyi Ubah FC 1-0 on Matchday 4 in Uyo, Dakkada FC travelled to Enugu to create a major upset.

Rangers have been struggling this season.

With just one win (1-0 over Sunshine Stars on Matchday one) from four matches and occupying an embarrassing position on the league table, the Flying Antelopes had nothing but victory on their minds when they filed out to take on Dakkada FC in Enugu.

When action began, the troubles of Rangers were exposed to the people of Enugu as Femi Ajayi opened the scoring for the visitors just 18 minutes into the match.

No one saw it coming but there was more to come.

Just before the break, Isaac George doubled the lead for the visitors, which was the start of the problems of Rangers and their fans at the stadium.

The 2015/2016 league champions couldn’t do much to change the outcome of the match and the game ended Rangers 0 Dakkada FC 2. Shocking!

Elsewhere, league leaders Plateau United continued their fine form to the season with a 1-3 victory over Delta Force in Asaba.

As early as six minutes into the match, Coach Abdul Maikaba’s team were already creating chances.

Ibrahim Mustapha missed a clear chance to put the team ahead after beating the goalkeeper but couldn’t take the chance.

In the 36th minute, Plateau United paid for the missed chances when Delta Force was awarded a penalty.

Kazie Eyinnaya stepped up to the spot and scored to give the home team the lead, the wake-up call for Plateau United who levelled up moments later after Uche Onwuasoanya benefited from a goalkeeping error.

In the second half, Plateau United turned up the heat as Michael Ibeh’s goal in the 72nd minute gave them the lead while Ibrahim Mustapha’s goal in extra time sealed the victory for the visitors at the Stephen Keshi Stadium in Asaba.

The victory ensured Plateau United maintained their position at the top of the league table and still unbeaten.

Their next match is against struggling Kano Pillars at the New Jos Stadium in Jos.

Similarly, Rivers United added to the woes of Delta State teams with a 0-1 victory over Warri Wolves at the Warri Stadium.

Coming from a decent performance against MFM FC in Lagos, where they shared points in 1-1 draw, they failed to replicate same against a determined Rivers United team.

Thirty-seven minutes into the match, Cletus Emotan sent in a cross from a free-kick and it found the head of an unmarked Stephen Gopey to give the Port Harcourt based team the lead.

Warri Wolves pushed and fought to draw level but it didn’t happen for them as Rivers United took maximum points back home and hope to consolidate in their next match against Abia Warriors.

The Changi Boys left it late till the 80th minute for Tasiu Lawal to score the opener and at the dying minutes of regulation time, Gambo Muhammad scored his first goal for the club to seal the victory for the home team.

Enyimba Football Club of Aba also returned to winning ways after coming from a difficult defeat to Sunshine Stars on Matchday 4 in Akure.

The People’s Elephant needed to win when they took on Adamawa United and they got the victory.

Victory was sealed in the first half as a brace from Victor Mbaoma in the 20th and 26th minutes of the match made the difference and was good enough to shoot Enyimba to third on the league table with 10 points.

The other teams from the East also recorded victories, except FC Ifeanyi Ubah that played a goalless draw with Lobi Stars in Nnewi.

Finally, Coach Fidelis Ilechukwu can breathe as Heartland recorded their first win of the season after beating Jigawa Golden Stars 1-0, thanks to Ugochukwu Leonard whose goal made the difference.

The Naze Millionaires now have two loses, two draws, and one win from five matches. Up next for them is Wikki Tourists at the Pantami Stadium in Gombe.

The struggles of Kano Pillars continued with a 0-0 result with Wikki Tourists.

The former league champions are yet to record a win this season and have recorded just two points from four matches.

Another struggling team is Akwa United. The Promise Keepers have recorded four draws and a loss from five matches.

Three of those draws have been at home and they have achieved just two points from a possible nine.

They played 1-1 with Nasarawa United in Uyo.

Ndifreke Effiong gave Coach John Obuh’s team the lead from the spot but they lost it when Godfrey West scored for the visitors.

The Nigeria Professional Football League has been criticised for a poor record of away victories but there’s been an improvement this season.

With just five Matchdays concluded, eight away victories have been recorded and that’s a clear message to followers of the league to brace up for a highly competitive season.