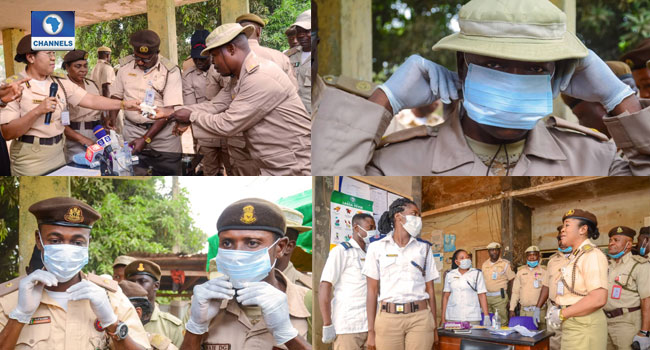 The Comptroller General of Nigeria Immigration Service (NIS) Muhammad Babandede has directed all heads of formations at border points to heighten sensitisation of their operatives.

Babandede in his directive urged the border officers to reduce body contacts and wear protective during their operations.

According to him, these preventive practices will help in guarding against any infection in their daily duties at the airport, seaport and land borders.

READ ALSO: I Wonder How Boko Haram Survived Up Till This Time – Buhari

This was revealed in a statement signed on Thursday by Sunday James, the spokesperson, for Comptroller General of Immigration Service

In response to this, the Comptroller of NIS in Ogun State, Doris Braimah commenced awareness to officers at the Idiroko Border Control Post.

While speaking during the sensitisation, the Ogun Comptroller, told the officers not to be careless while managing cases related to cough, fever or breathing difficulties.

According to her, they should adopt preventive measures while in contact with migrants who cross the borders, citing usage of hand sanitizers, covering their nose with face-mask, among others, as part of pro-active measures to curb cross-border disease.

She equally urged them to liaise with health officials at the border to stop diseases from entering the country, reminding the officers that the Idiroko Border Post is one of the most important exit and entry point in the West African nation.