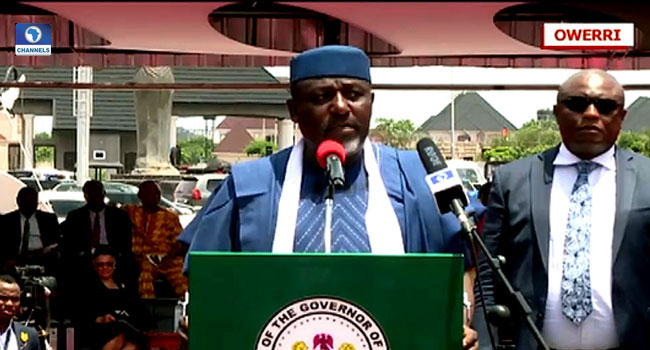 The Imo State Governor, Rochas Okorocha, has apologised to judges and lawyers in the state for not meeting up with their demands and all they have beckoned on him for.

Governor Okorocha tendered his apology on Wednesday during the inauguration of the newly built Justice Oputa High Court Complex in Owerri, the state capital.

He said, “I have not met up with the demands of the judges of Imo State, neither I have I met up with all that they have asked me to do for them.

“But I believe that by the time they come into this office, they might forget and forgive that there is something better for the future than what we are asking for today”.

“I have given Owerri a new life and now Owerri is functioning.

“Our real estate is growing in a geometrical progression.

The governor whose tenure will be expiring on May 29, boasted of his administrative achievement in giving free education.

“You will remember me for the free education, for the past 8 years none of our children in primary, secondary or territory institution has paid school fees.

“We have produced more lawyers and judges which shall take after from you when the time comes.

“Our projects are there to speak for us”.

On the state health sector, he said his administration has built enough hospitals in the state adding that what is left for the incoming government is to maintain.

“Today I am proud to say that no governor would ever think about building any hospital again in the next 50 years because the issue of hospital in this land has been sealed signed and delivered”.

While rounding up his speech the governor promised lawyers and judges to clear up all outstanding salaries in the state.

“Before I leave next week I will make sure I clear all your outstanding which the CJ has reminded me about”, he added.