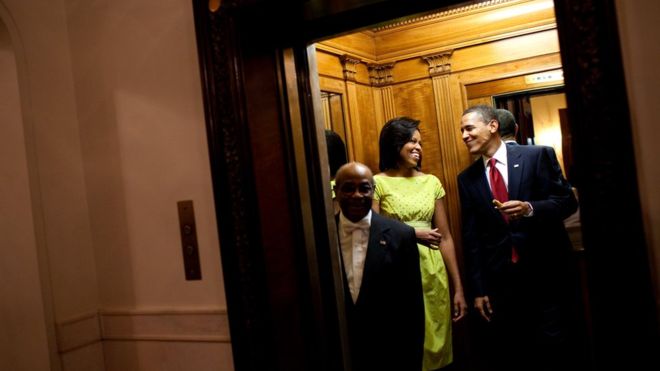 A former White House butler, who worked for 11 presidents in a career that spanned five decades, has died with coronavirus aged 91.

It was Jackie Kennedy who noticed Wilson Roosevelt Jerman while he was working as a cleaner in the White House.

The then First Lady had him promoted, and from then on he worked as a butler.

"She was instrumental in ensuring that that happened," his granddaughter, Jamila Garrett, told Fox 5.

Decades later Mr Jerman was commemorated by another First Lady, appearing in a photo in Michelle Obama's memoir Becoming.

Paying tribute after his death, Mrs Obama said her family were "lucky to have known him".

"With his kindness and care, Wilson Jerman helped make the White House a home for decades of First Families, including ours," she said in a statement to NBC News.

"His service to others - his willingness to go above and beyond for the country he loved and all those whose lives he touched - is a legacy worthy of his generous spirit."

He died with coronavirus last weekend.

Mr Jerman's family members say he stood out not just to the Kennedys, who were in the White House during 1961-63, and the Obamas, who lived there from 2009 to 2017, but others he met in his roles.

Mr Jerman's career began in 1957 during the Eisenhower administration. In his last position, he served as a maître d' in the Obama White House.

He left his position in 2012, and President Obama honoured him with a series of plaques, one that represented each of the presidents he had served, Mr Jerman's granddaughter Shanta Taylor Gay told CNN.

He remains an important figure for those who study the history of African Americans and their role in political life.

Like other African-American men of his generation, he showed dignity while serving in one of the few positions that was available to him at the time, said Ohio State University's Koritha Mitchell, author of From Slave Cabins to the White House.

She said he must have found it satisfying to end his career in the way that he did.

He was working for Mr Obama, "a dignified president who was also African American", she said, adding: "That must have felt like a victory."