Super Falcons of Nigeria and Barcelona Femení star, Asisat Oshoala was crowned the African Women’s Player of the Year for the fourth time in her career last week. It also meant equaling the record of her self-acclaimed mentor and compatriot, former Super Falcons of Nigeria scoring machine, Perpetua Nkwocha while joining Samuel Eto’o Fils and Toure Yaya on the illustrious list of being the only African footballers to have won the award four times. 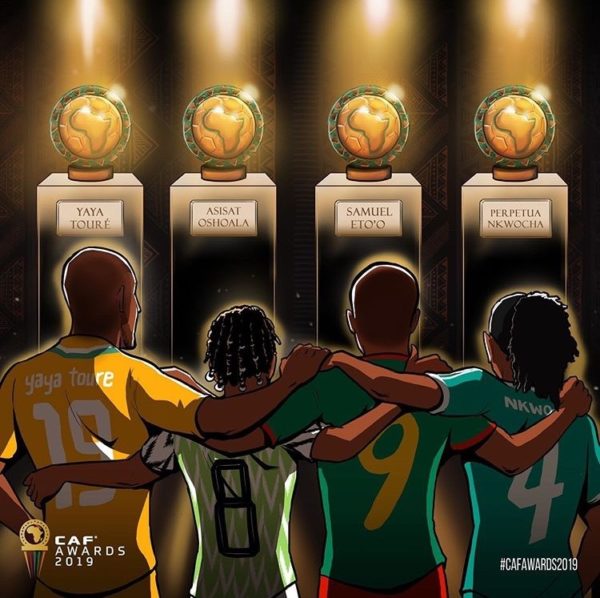 However, what should have been a moment of exchanging congratulatory goodwill quickly turned into social media vitriols after voting choices for the nominees were shown. The accusation being that Nkwocha voted for Oshoala in fifth place because she did not want her to win so as not to tie her record. Some had even begun to attach ethnocentric undertones. This is ignorant and obviously based on unfounded sentiments rather than an objective articulation of facts. I find it imperative that certain misguided notions about the CAF Women’s award which crowned Oshoala as the winner vis-à-vis Nkwocha’s voting decision are immediately corrected before they evolve into something toxic and unmanageable.

Perpetua Nkwocha won multiple individual and collective awards including being named African Women’s Player of the Year in 2004, 2005 2010 and 2011. During an incredible career which spanned across two decades, she represented Nigeria at seven African Women Cup of Nations, winning it a record five times in 2002, 2004, 2006, 2010 and 2014. She also finished as the highest goal scorer in the 2004, 2006 and 2010 editions respectively while participating in four FIFA World cups and 3 Olympic tournaments. She equally holds a plethora of goalscoring records across different competitions and categories and has gone on to serve Nigeria in other coaching and dignified capacities. She has spoken highly of Oshoala since her emergence. So, accusing her of being ‘jealous’ of Oshoala is unfounded. However, let us explore the details. 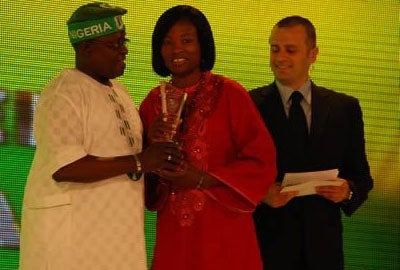 Perpetua Nkwocha is crowned African Women’s Footballer of the Year for the third time in 2010. Photo Credit: Vanguard Newspaper

The 30-man and 10-woman shortlists alongside other categories were respectively compiled by “a panel of media and technical professionals” according to CAF. They were then reduced to ten (10) for the Men’s and five (5) for the Women’s from which Nkwocha and others took part in—drawn from a designated “CAF Technical and Development Committee,” a panel of “media experts” and designated “legends.” They were mandated to select their top five (5) players from both categories. This was known as Phase 1 of voting. The selected five (5) nominees were then whittled down to the final three (3) for the awards. Known as the Phase 2 of voting.

The three (3) finalists were decided by “Head Coaches/Technical Directors of CAF Member Associations, Captains of CAF Member Associations” and the winner ultimately crowned. This means that Nkwocha only took part in Phase 1 with Cameroon’s Ajara Nchout finishing with 133 vote counts to Oshoala’s 129 and South Africa’s Christina Thembi Kgatlana with 87 and did not participate in the Phase 2—the decisive voting round. This also means that Nkwocha, alongside Nigeria, was not in any way responsible for how the votes ended, and even if Oshoala’s name had appeared first in the said category—an unlikely event seeing that other 53 CAF Member Associations also voted—it would not, in any way, have influenced the final voting outcome as she still ended with 351 vote counts to Nchout’s 321 and Kgatlana’s 247.

Now that these misguided, ignorant assumptions have been dealt with, we should get to the crux of the matter: Oshoala’s winning.

In my usual blunt nature of opinionation, considering the shortlisted nominees, Malawian and Jiangsu Suning forward, Tabitha Chawinga deserved to win. Let us look at the facts: as at the time of voting—November 12th—Tabitha had won both the 2019 Chinese Women’s League and FA Cup with Jiangsu Suning finishing as the league top scorer with 12 goals in 14 games—same league Kgatlana’s Beijing BG Phoenix finished in fifth place with her managing only 6 goals. Chawinga also capped off an amazing year by finishing as top goal scorer in the African qualifiers for the Tokyo 2020 Olympic Games. Nigeria’s Super Falcons didn’t even get that far to qualify for the global event. That Chawinga was left out of the final three (3) nominees is an injustice I am yet to reconcile with.

For Oshoala, there were positives like scoring the winner (her only goal) against South Korea to clinch Nigeria’s Round of 16 ticket at the World Cup—a 20-year assumed ‘jinx’; scoring in the 2018/2019 UEFA Women’s Champions League final in the 4-1 drubbing against European champions Lyon; seven goals in seven games; and failed to qualify for the 2020 Tokyo Olympic Games.

Nchout (the first runner-up) was nominated for Puskas Goal of the Year while her goal against New Zealand won the second-best goal of the tournament. Her two goals at the World Cup helped Cameroun to a Round of 16 finish. Kgatlana exited at the third round of the Tokyo 2020 Olympic Games and scored a solitary goal at the FIFA World Cup. As already mentioned, she managed only 6 goals during the regular season.
From all indications, Chawinga deserved to win, well ahead of Oshoala, Nchout, Kgatlana and Onguene; and that’s a statistical fact. Yet, we seem to be driven by sentiments. There is the much-vaunted perception that the club profiles of nominees highly influence votes so much that the final votes may not reflect the true, objective merits of shortlisted candidates. And we have seen it play out repeatedly in the past: Barcelona’s Samuel Eto’o Fils finished ahead of Bolton Wanderers’ Austin “Jay Jay” Okocha in 2004; FC Barcelona’s Lionel Messi beat Inter Milan’s Wesley Sneijder in 2010; Real Madrid’s Luka Modric eclipsed Juventus FC’s Cristiano Ronaldo just last year and so on. Oshoala, in this case, plays for FC Barcelona Femení in the Primera Iberdrola—a ‘perceived’ stronger league and obviously more prestigious than the Chinese league.

Make no mistake though, this does not take anything away from what Oshoala has achieved in her meteoric rise in global women’s football, neither does it change the records she breaks—and will still break. It also does not change the fact that for the past calendar year under review, some others deserved to win ahead of her. Are they better than Oshoala? Not even close. But in contextually stating the facts about their legitimacy, Oshoala did not merit it this time.

The biggest issue with our sentimental ideology is how, despite our public affinity for meritocracy—that unhinged notion that those who most qualify for an award must not be denied on the basis of personal preference—we become subjective once certain persons are involved. And just because Nkwocha happens to be a fellow Nigerian and equally holds a distinctive record, must not drive the sentimental feeling that a player should be voted for, simply for being her compatriot.

It is important that votes reflect, objectively and truthfully, true accounts of the nominees’ footballing achievements and not mere tribal or nationalistic sentiments nor respective club’s pedigrees. Until we fix this mental quagmire, votes for footballing awards will continue to polarise. Oshoala did not deserve it this time. And no, Nkwocha’s voting choices or placements had nothing to do with Oshoala breaking her record. After all, that is exactly why records are there—to be broken.