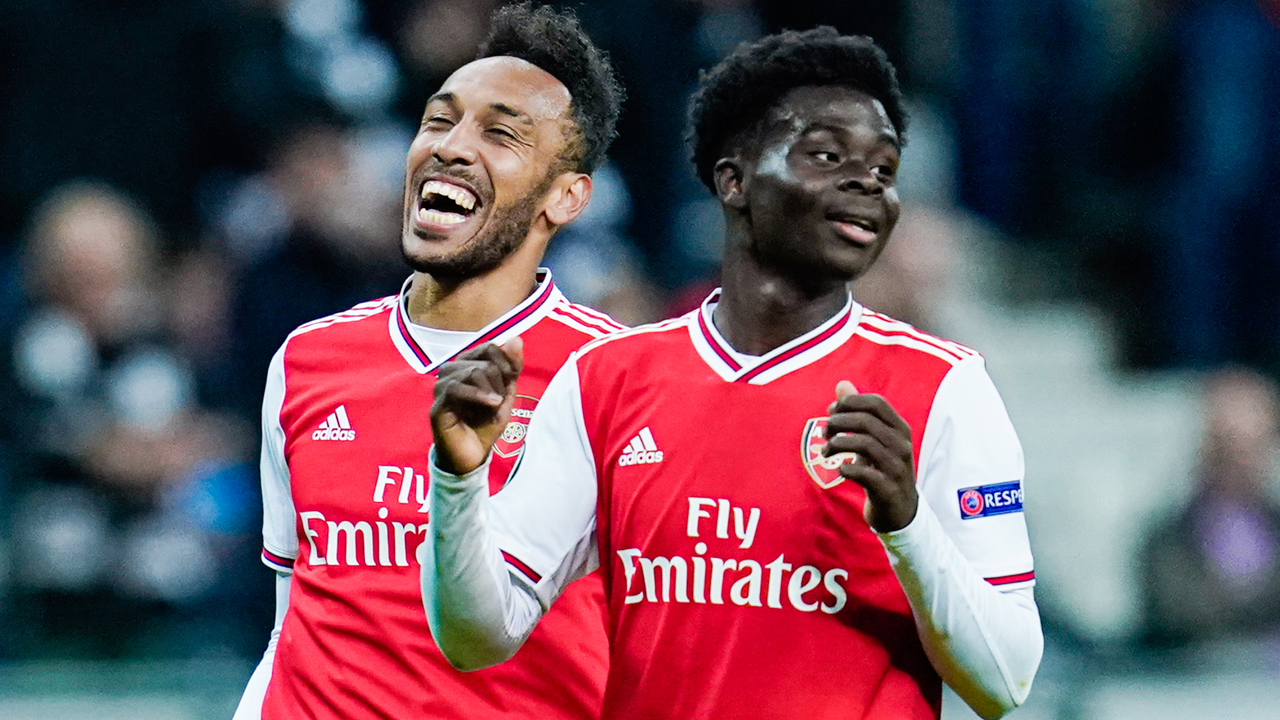 Dynamo Kiev and FC Copenhagen scored 1-0 wins over Malmo and Lugano respectively in Group B while Cluj of Romania beat Lazio 2-1 and Rennes and Celtic played out a 1-1 draw in Group E.

Joe Willock put Arsenal ahead in the first half with a deflected shot that flew in off the underside of the crossbar, but Frankfurt battled gamely until midfielder Dominik Kohr was sent off for picking up two yellow cards in the second half.

Londoner Saka, 18, added a second with a superb curling shot in the 85th minute and Pierre-Emerick Aubameyang slotted home a third to secure all three points for the Premier League side in the Group F clash in Germany.

The win put Arsenal top of the group ahead of Standard Liege who beat Vitoria Guimares of Portugal 2-0 at home.

Saka’s performance was such that Arsenal supporters could not help but compare him to a young Lionel Messi.

At the age of 18 in the 2005/06 season when Barcelona became La Liga and European champions, Messi scored eight goals in 25 appearances.


Saka only made four appearances in all competitions for Arsenal’s first team last season. But following his first senior goal for the Gunners in his first game of the new campaign, Arsenal fans have raised their expectations for supposedly Messi’s successor.

“Like Barcelona got Messi through La Masia, we’ve got Bukayo Saka from Hale End as well, similar style, the future ain’t ready, this kid is the real deal.

One added: “I’m not joking when I say this. But Saka is going to be better than both Lionel Messi and Cristiano Ronaldo!”

Meanwhile, Apoel Nicosia came back from two goals down to lead 3-2 against Dudelange of Luxembourg, but goals by Dominik Stolz and Daniel Sinizi gave the visitors a 4-3 win in Group A. Qarabag slumped to a 3-0 home defeat by Sevilla in the group’s other game.

Winger Kevin Bua scored twice for Swiss side FC Basel as they got off to the perfect start in Group C by hammering Krasnodar 5-0 at home. Getafe beat Trabzonspor 1-0 in the group’s other game.

In Group E, Norwegian side Rosenborg fell to a 1-0 defeat at Austrian side LASK and Dutch club PSV Eindhoven edged out Portugal’s Sporting Lisbon 2-1.

At Old Trafford, Mason Greenwood enhanced his growing reputation as a Manchester United super-star of the future with his first senior goal.

The 17-year-old striker struck with a superbly-taken 73 minute goal to break the deadlock in a game dominated by Ole Gunnar Solskjaer’s young stars.

The United boss fielded a team with an average age of just 24 years and 145 days with rookies Angel Gomes and Tahith Chong joining Greenwood in the starting line-up.

And his stars delivered some sparkling attacking football as they kicked off their Europa League campaign with a narrow win over their opponents who travelled 3,700 miles from Kazakhstan.

Marcus Rashford missed two great first half chances to make it an easy stroll for United in a one-sided clash.

But Greenwood was the new darling of Old Trafford, firing home with his right foot to secure victory.